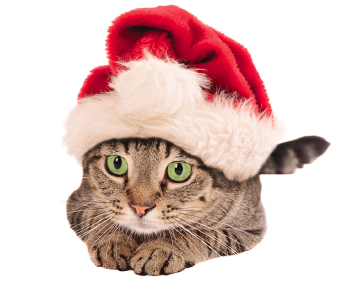 Christmas is the perfect time of year to indulge in good food. It is also a great excuse to treat our pets to some special treats as well! There are however some foods to avoid.

Chocolate. Most people will be aware that chocolate is poisonous for dogs, but it is also the same for cats. It contains a substance called theobromine, which acts as a stimulant. It is also poisonous to humans, but because dogs and cats are slower to metabolise theobromine, we tend to see the toxic effects more regularly. In small amounts, you will see mild gastric signs such as vomiting and diarrhoea. In larger amounts theobromine can cause muscle stiffness, wobbling, seizures, panting and can cause an irregular heart rhythm. It can be fatal. Dark chocolate contains the highest level of theobromine, whereas white chocolate will contain very little.

Grapes, sultanas and raisins. These affect dogs and theoretically cats as well. The precise mechanism of poisoning is not known even today, but in dogs they can cause severe kidney disease. The strange thing is that some dogs can eat a whole bunch of grapes and show no clinical signs, whereas others will eat a small number and show extreme signs. Christmas cake, whole grapes, mince pies and Christmas pudding are all to be avoided. Clinical signs include, vomiting, lethargy, abdominal pain and unwillingness to eat. All animals should receive immediate care following ingestion of anything that contains grapes, sultanas or raisins.

Anti-freeze. Anti-freeze for cars and windows is one for cats more than dogs. Every winter at Donaldson’s vets we have several cats that will present with signs of poisoning. Cats will drink anti-freeze as it pools on the ground because it is sweet tasting. The culprit is something called ethylene glycol, which affects the kidneys. Signs include vomiting, severe lethargy, wobbling, tremors, lack of appetite and collapse. The treatment involves giving high rates of fluids and unbelievably injecting vodka into the veins! Unfortunately this is rarely successful unless treated quickly, and often cats are euthanized as they deteriorate.

Macadamia Nuts. Again, we do not know why these are poisonous to dogs, but they can cause signs including weakness, depression, tremors, vomiting and hyperthermia. Poisoning is rarely fatal.

Bones. Cooked bones are a no-no for all dogs and cats as they splinter and cause irritation and sometimes perforation of the bowels. Be careful if you do give your dog bones, and make sure that all dogs with bones are supervised especially around children. I generally advise avoiding bones all together.

Lilies. Any part of the lily plant is toxic to cats. As little as 2 leaves can cause severe kidney disease. Clinical signs include vomiting, drooling, an increased in drinking followed by a decrease and collapse. This can be deadly within 48 hours if left untreated.

Conclusion. I firmly believe being able to treat your pets is one of the nice things about owning them. A simple bit of turkey meat is a great option and there is a wide range of little extra stocking treats from your local pet shop you can try. I think that the best thing for a cat at Christmas is some new toys or a new basket and for a dog a long walk with you, their best friend.

I hope you have a good one!