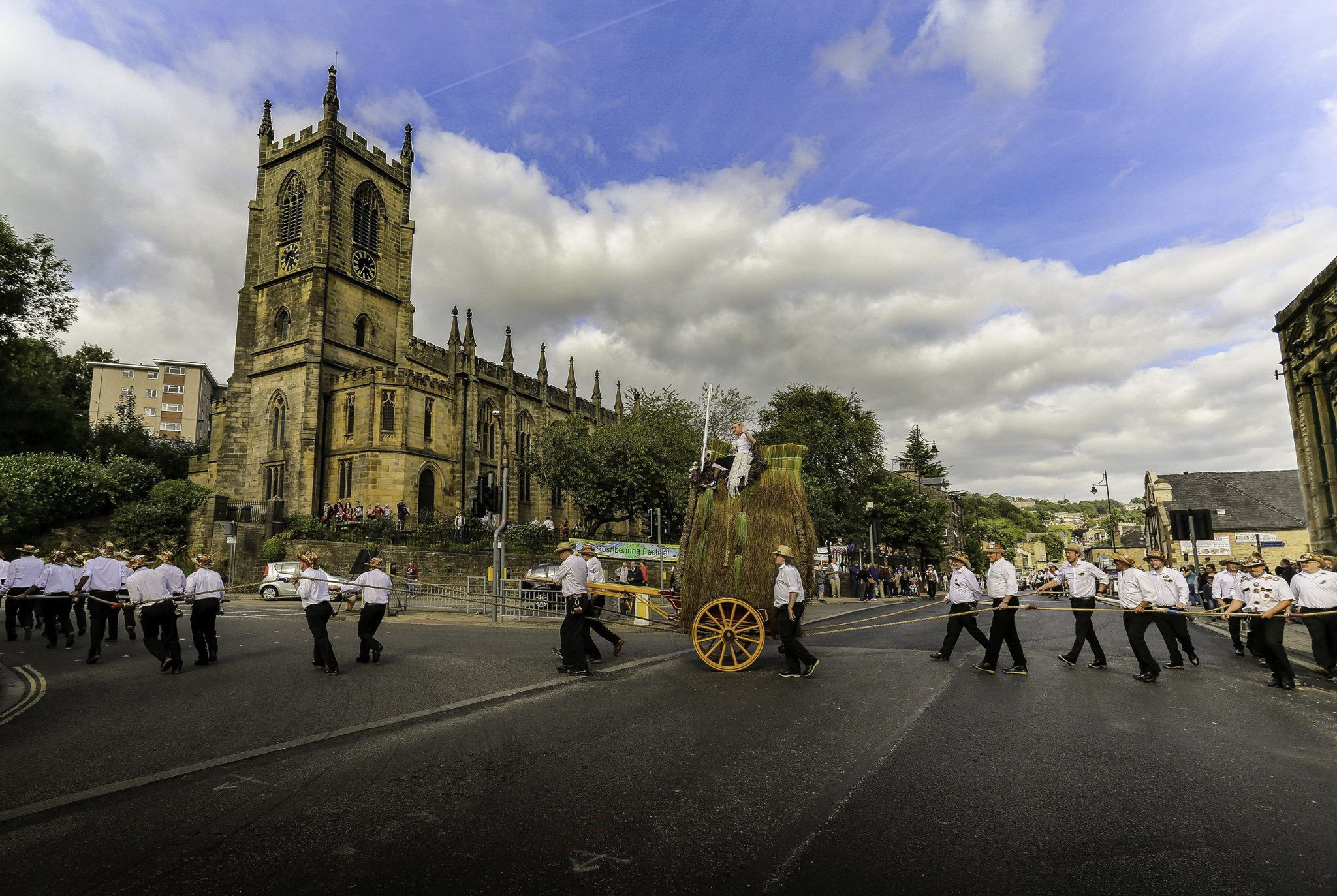 The Sowerby Bridge Rushbearing Festival is one of only a few instances of this particular English custom still being celebrated annually. This year sees the 40th modern Rushbearing and looks set to be the biggest yet.

Rushbearing itself dates back several centuries to the time when church floors consisted of little more than stone flags or beaten earth and rushes were used as a winter covering. Each year, in late summer, the rotten rushes were cleared out and new ones taken to the churches in carts. Human nature being what it is, this annual custom developed into an excuse for celebration involving revelry, music and morris dancing. The focal point of these festivals became the celebrated ‘rushcart.’ Rivalry between the supporters and builders of different carts was sometimes intense and open brawls often developed, no doubt induced by the large amount of beer that had inevitably been consumed.

The practice of building rushcarts had died out in most places by the end of the 19th century, however the first decade of the 20th century saw a number of places revive the practice, usually to observe some civic occasion. Such a cart was built in Sowerby Bridge in 1906 (see photo) as part of a celebration to mark sixty years of local government. It would be over seven decades before the town saw another.

The year 1977 saw the Silver Jubilee of Queen Elizabeth II and towns up and down the country were finding ways to mark the event. In Sowerby Bridge plans were already underway to revive the Sowerby Bridge Gala but two men, Fred Knights and Garry Stringfellow, thought that a Rushbearing Festival would also make a fitting celebration.

The 1977 Rushbearing took place on Saturday September 3rd and was a single day event. Token rushes were presented at Christ Church and Tuel Lane Methodist’s in Sowerby Bridge and St. George’s and St. Peter’s churches in Sowerby. The procession was accompanied by the Horwich Morris Dancers (who had also been present at the 1906 event) and the recently formed Kirkburton Rapier dancers from Huddersfield (who will be performing again this year).

The day went as planned, and when reflecting back on it the organisers and participants agreed that they’d had so much fun, it would be madness not to do it again the following year. Thirty-nine years on, the event is going stronger than ever.

Rushbearing 2016, over the weekend of the 3rd and 4th September, will be the biggest festival yet. The nine-mile route over two days, will see the rushcart visit seven local churches and numerous public houses from Warley through Sowerby Bridge, Sowerby, Cottonstones, Triangle and Ripponden. A team of young ladies will take turns to ride on top of the cart as it is pulled by sixty local men dressed in Panama hats, white shirts, black trousers and clogs. Accompanying them is a group of supporters in Edwardian dress. Eighteen teams of folk dancers will accompany the procession to entertain the crowds and on the Saturday the rushcart will be led by the West Yorkshire Police Band.

Make sure you don’t miss this amazing spectacle. Full details, including timetables and route maps for the weekend, can be found at www.rushbearing.com.