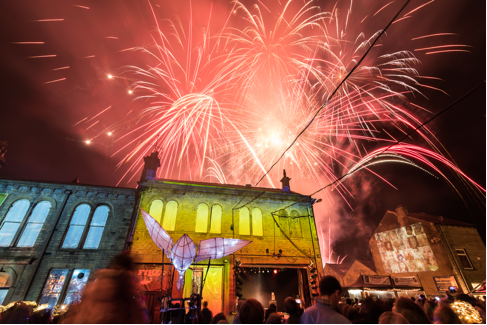 SOWERBY BRIDGE FIRE AND WATER WINTERLIGHT 2016 – the biggest and most successful yet!

On Sunday 11th December at 4.30pm over three hundred people from Calderdale took part in a procession from Sowerby Bridge Railway Station to the Winterlight Festival site. The parade involved the six Gigantes y Cabezudos of the Mortal Orchestra. They were escorted by attendees, dressed in chef’s illuminated costumes, lantern carriers from local schools, illuminated geese choreographed by Calderdale Theatre School and torch bearers from local community groups. The procession can be seen on YouTube at https://www.youtube.com/watch?v=FDJ_jy5rgtA

Fire and Water had already run lantern and illumination workshops at Ryburn Valley High School, Triangle, St Mary’s and Sowerby Village Primary Schools, Pennine Magpie, Ryburn Arts Group, Calderdale College and Artworks. The procession was accompanied by a fugue, specially written for the giant puppets! When the procession arrived at the Festival site on Hollins Mill Lane they were greeted by a performance to deliver a giant egg devised by Calderdale Theatre School. The flying geese (made in community workshops) decorated the street alongside illuminated lanterns and other sculptures. On arriving at the Festival site on Hollins Mill Lane, lead elements from the parade performed an opening ceremony culminating with a goose fly past dance and a giant egg laying moment. This specially devised theatrical interface between the parade ending and the main event beginning triggered a dramatic moment for the bespoke light projections and the opening band to start Winterlight 2016.

The festival began with Hope and Social to a bespoke video projected on to the buildings by digital artist Andy McKeown. The projections included over 350 portraits via Instagram of local people. Fire Beneath the Sea performed on the fire station stage. Crowds were entertained by Granny Turismo, the shopping trolley dance display team and were engaged with a roving performance consisting of Bunraku-style illuminated puppets by Curious Cargo, Froliked’s human tree and Circus Fudge’s musical mangle as well as a six metre, inflatable illuminated mobile lobster performed by Artizanti Display. The interior of the building included an installation of lanterns from local students and a creative collaboration of Companies Historique, Inztant, Avanti and Whalley Range All Stars. Window designs were created for the festival by The Ryburn Art Group and Calderdale College.

The Buildings: In November volunteers and Happy Days Social Enterprise Building & Roofing contractors completed the structural separation work – necessary to enable the dry rot treatment programme in the library to be completed by the council. Fire and Water are now going to tender for some vital roof repairs to the Council Offices and the Fire Station’s hose tower which, if funds allow, will stop the weather (and the pigeons) from getting into these buildings. This part of the building complex will then start to dry out and after treating the dry rot, parts of this building should be brought into community use.

Funding for running costs and building work is slow but steady but more is still needed – both individual donations and as many people as possible to commit to a regular donation.  Fire and Water are eligible for Gift Aid via http://localgiving.org/charity/fireandwater this is the best way for anyone to contribute.

Membership is open to all and as many members as possible are needed – just get in touch.