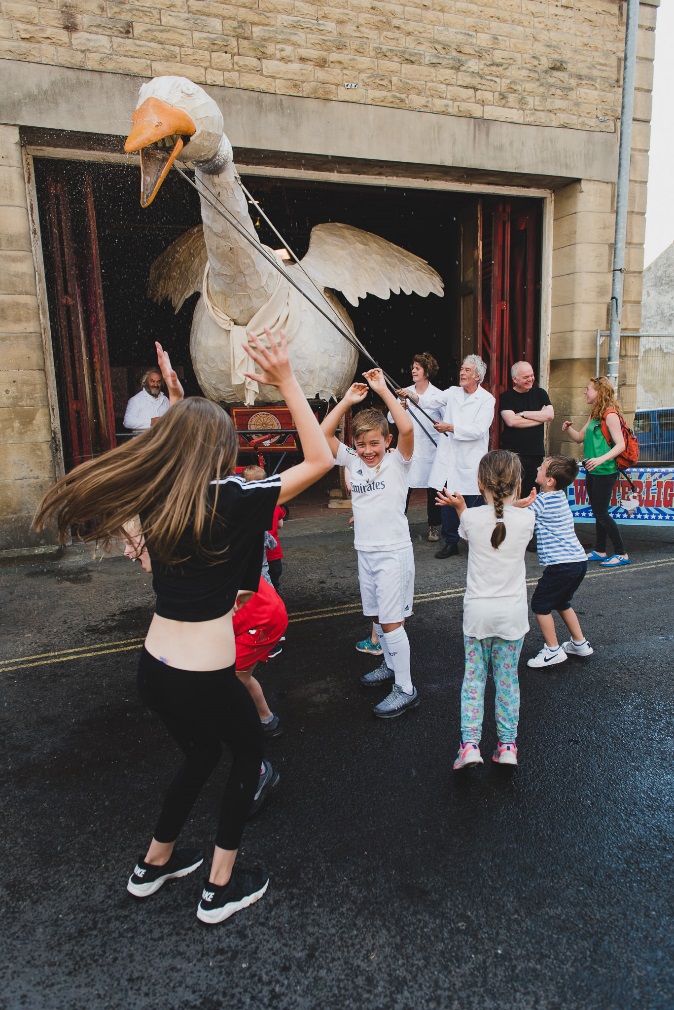 Fire and Water Winterlight’s animated and an extremely wilful goose made its first public appearance at September’s Rushbearing stop outside the Hollins Mill pub, where it managed to catch out a lot of small children and a fair few of the cart pullers as well. It performed again at the People’s Fair in the Piece Hall where it was joined by the Rushbearing Pullers and the Calderdale Theatre School. It was an extravagant show representing Sowerby Bridge’s experiences in the Great Boxing Day Flood.

The old Sowerby Bridge fire station was put to good use as a workshop to build the new goose. The building team was led by designer Bryan Tweddle, who was supported by Frank Darnley, Bill Palmer, Dave and Jane Pugh, Sheila Woodhead, Steve Gumbley,  Phil Hawdon, John Anderton and Denholt Steel Fabrications, our magnificent cart builders.

This is the Fire Station being put to good community use. If you have need of exhibition space, performance, teaching, or any sort of event space, the fire station is available. Get in touch and tell us about your ideas.

Fire and Water project’s roof repair mentioned in the last issue has been successfully completed. A large part of the council offices, the swimming baths reception building and the tower on the fire station are both weather and pigeon-proof and these areas are drying out. If we can just clean out the pigeon legacy, install some electricity and re-glaze the windows then we’ll have some new workable spaces available and in use!

We had a break-in whilst the building work was under way, and the old entrance doors from the car park were wrecked. The buildings are secure but we’ve had to keep the car park barriers in place much longer than anticipated. This is because we need to maintain access for the council’s builders working on the library, and to dissuade unauthorised access to the site. As soon as we have finished the permanent security work we’ll remove the barriers until Fire and Water needs the space again.

Running costs. As always we have to mention running costs – they never go away! Please donate anything you can manage and if you are waged, do it via the LocalGiving website so that we can benefit from Gift Aid: https://localgiving.org/charity/fireandwater

If you have any questions please phone me (office hours) on 01422 834291, speak to any of the directors or send a message via the contact page on the website.

Thank you all, Phil Hawdon