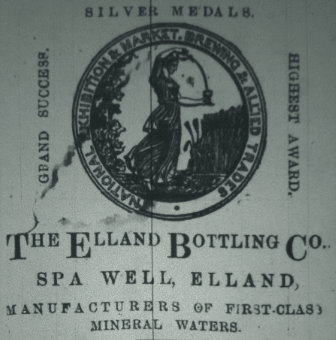 Before modern communications we relied upon the Town Crier for news and notices.

‘On Tuesday evening Mr W. Rawson of Westgate, Elland was appointed Town Crier. The following were fixed as the maximum charges for his services in ‘crying’ in different parts of the township:-

The four overseers, at their own expense, purchased a town bell for the Crier. The bell was inscribed   “Presented to the township of Elland-cum-Greetland, 1894”.’

There is a locality at Elland known as Spa Well. Some years ago pilgrims came to Elland from surrounding places to fetch for domestic and drink for medicinal purposes thevwater of well, which is still strongly impregnated with sulphur hence the name. A charge of a ha’penny was made for every bucket filled with this precious water. It was regarded as an excellent tonic. Many took the waters without the expense of a journey to Harrogate or Doncaster.

The water course should still be present but caution must be exercised before sampling.

HM Inspector of Schools having condemned the system in vogue in the Elland Board Schools, a new system has been tried at the South End Board Schools. An apparatus has been fixed in one of the classrooms, which consists of a tube with a diffuser on the top. The fresh air enters the tube from the outside through a grating, passes over the hot water pipes, and is thrown out into the room through the apertures on the diffuser. At the ceiling of the room, near to an extractor, is also fixed a small jet of gas to create an upward current and ensure constant change of air in the room.

The ‘system’ was judged satisfactory but the air across Elland, especially at South End, could hardly be classed as fresh as the mill chimneys belched out their smoke.

Let there be light

‘A proposal is being put forward that an effort should be made to fit up the parish church with electric light. The present lighting of the church is unsatisfactory. A strong smell of gas was noticed a few Sundays ago. An examination showed that one of the main supply pipes was cracked and had apparently, years ago, been wrapped round in india-rubber rag. When this had been mended, one of the pipes in the old vestry was found to be split, and in this case copper wire and brown paper had been used to prevent an escape! When a match was applied there was a flame one foot in length.’

It would take (almost) a decade before Elland had an ‘Electricity Works’ although some crafty local manufacturers explored ways to shift power from their factories to light their homes.