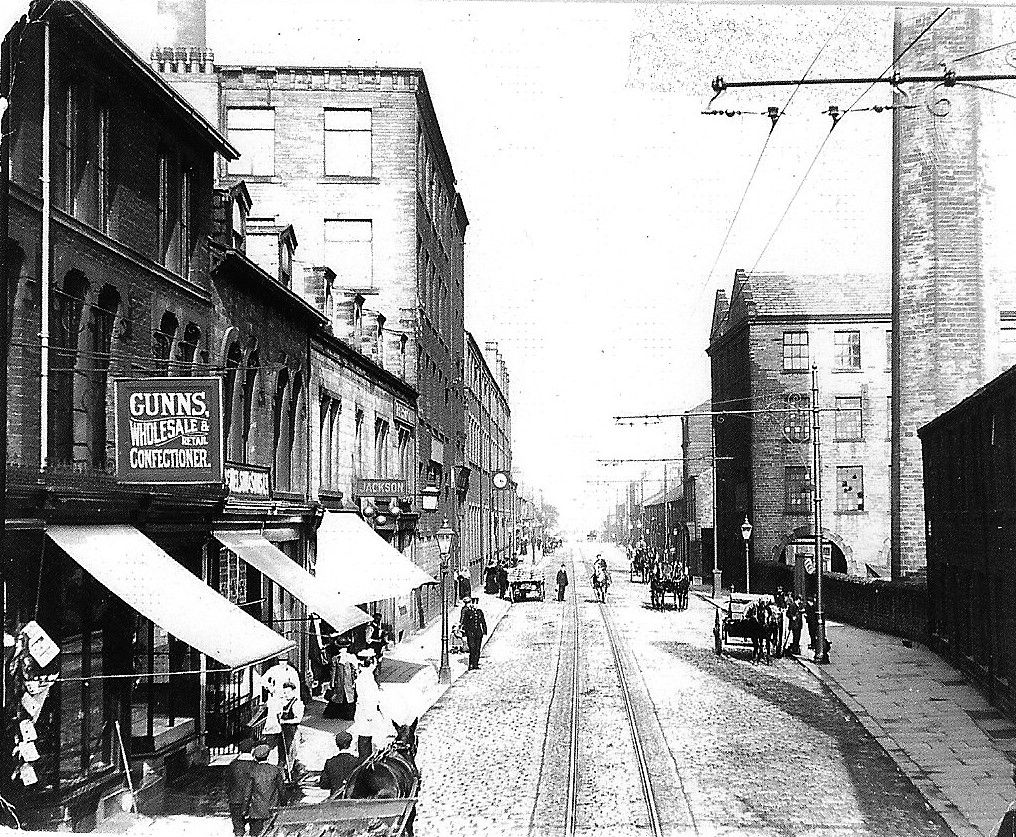 This is a view of Wharf Street, Sowerby Bridge, taken in 1910 from the bottom of Tower Hill and looking towards Bolton Brow. It appears to have been taken from the upper deck of a tram. On the left-hand side of the street at No 3 is Gunns wholesale and retail confectioner. Next at No 5 was Thomas Marchant, butcher, and Thomas Blake, fried fish dealer, at No 7. At No 11 advertised by the three balls sign is Joseph Jackson, pawnbroker and jeweller. Smith’s Yard came next with S. Gillibrand, blacksmith, Edward Golding, skep and basket maker and G. Kershaw & Son, plumbers. Just passed the pawnbroker’s sign and above the lamp-post can be seen the large lamp outside the Branch Inn at No 15, the landlord being Charles A. Simpson. The pub was closed in 1949 following an inspection which heavily criticised the sanitary arrangements. The block from 11 to 15 has now been demolished and the site is occupied by the B&M supermarket.

Next came the big factories of Siddall & Hilton, bedstead and mattress manufacturers and Pollit & Wigzell engineers and steam engine makers. The clock was a well-known feature outside Pollit & Wigzells. Sandwiched in between was the premises of William Haigh, draper, an early department store with its own lift; the building is now converted into flats. Pollit & Wigzell closed down in January 1931 due to electric motors replacing steam engines. The factory was demolished and Regent Parade including the Regent Cinema (later the Essoldo) was built on the site. The Essoldo closed in 1967, the last film shown being ‘GI Blues’ starring Elvis Presley.

On the other side of the road the dark building is Longbottoms worsted coating manufacturer, in a historically important red-brick mill built around 1770. In 1984, while empty, it burnt down after being set on fire by a youth. Further along is the Carlton Mill of S.Whiteley & Co. hosiery and embroidery yarn manufacturers, which is now converted into flats.